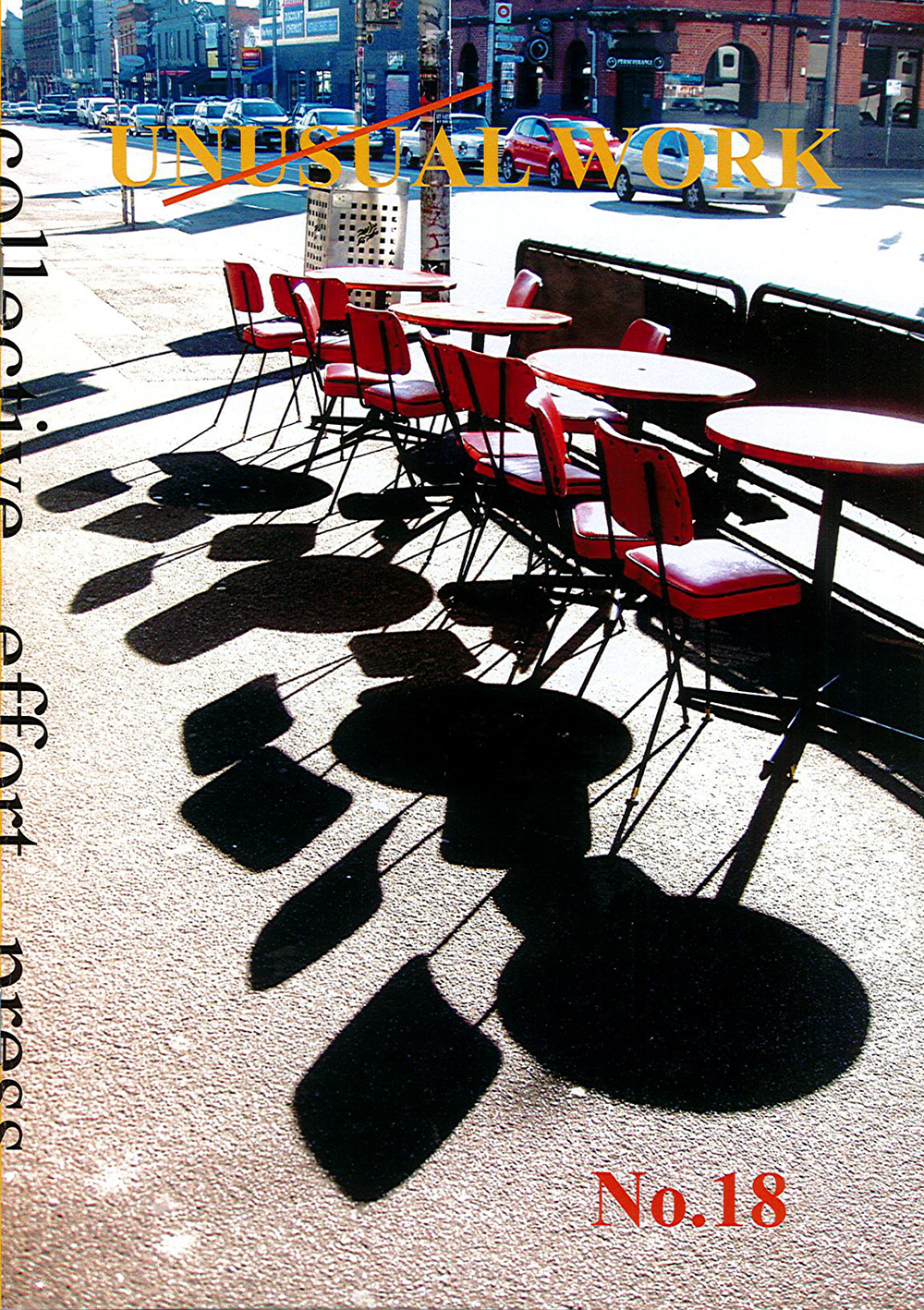 I was surprised to learn that this wonderfully refreshing small magazine has been going for ten years. It is the latest in a long list of independent periodicals produced by Collective Effort Press (CEP) since the 1970s. In the editorial, poet and editor TT.O. ruminates on the possibility of further issues being dependent on subscribers and buyers, so I encourage you to subscribe to this unheralded gem of Oz lit. At $10 an issue it’s the bargain of the decade! In this review of the tenth anniversary issue, launched late 2015, I will outline why the magazine is so refreshing and what it contains.

The usually full-colour covers, often photos, sometimes graphics, are always eye-catching and unusual. The cover photo (by TT.O.) for issue 18 is a pic Cartier-Bresson would have been proud of: a line of red, pavement café tables and chairs in strong sunshine casting sharp shadows across the off-white cement in a jumble of solid squares and circles and lines reminiscent of musical notes, the latter foregrounded and dominant.

A regular feature is the ‘quotations’ page, featuring a running list of short quotes from various contemporary (except for the appearance of CJ Dennis) Australian poets. One of the thirty-four in this issue is John Forbes’s ‘If I know what a poem means when I’m half way through it, it’s rooted’; another, by Michael Farrell, ‘They go looking for bones to talk to, like Lorca’.

The substance of the magazine is a mix of free verse (standard and otherwise), visual poems of many kinds, photo-poems, handwritten poems, prose poems, prose pieces, graphics and colour surprises, and some ‘unusual’ structures throughout, all professionally presented. This issue comes with a bonus CD.

Two free-verse poems by Jan Napier open the magazine. These are poems of lament for demeaned women, powerful because of the imagery of the sea, and remarkably sharp and original in their composition, so it surprises and challenges: ‘Ova ravened by the crab’, ‘a foetal diaspora’, and ‘bunny rug’s unclutched’. There follows Anthony Barker’s page length ‘prosaic’ poem, less image-driven, on the altered state from an adolescent ‘first kiss’ and subsequent psychological and emotional meanderings. The power of the poem is in its unpretentious honesty, its true vernacular, and it is alive and affecting for it. This is the kind of poetry that UW publishes that makes you want to read more. On the opposite page there is a Barker concrete poem, a visual version of the poem, of squiggled faces, with Xs for eyes (geddit?—one of the lines in the poem is ‘his eyes didn’t focus right’), a little v for a nose, and a variant line for the mouth. The ‘mood’ of the faces alters though the depiction of the mouth.

Koraly Dimitriadis gives us two poems that ‘play’ with form: the first is a child’s run-on commentary of shopping with her ‘mummy’, reflecting the strain of controlling an energetic child in, again, simple and repetitive language to moving effect. The second poem is concrete: visual play on the ‘need’ for ‘space’ ‘alone’ to ‘own’ to ‘find’—find what? The repeated word ‘alone’, is perhaps the clue, the origin of which is ‘all one’. This poem almost makes you want to speak it out loud, to hear it. If you get the chance, I suggest you read it this way—indeed, read all the poems/all poems this way.

One criticism I have of the magazine arises when writing a review: there are no page numbers. But I can say that there are 52 pages of wonderfully inventive, surprising, subtle, unsubtle, quiet, loud, variable-form works. Some you may not get or like, but from most you will get a KICK—in the pants or in the psyche.

I have reviewed the first four or five works, but I will pick and choose others to give you a feel for the whole magazine. Andy Jackson includes two more of his remarkable series of poems on his condition of scoliosis. These works bring the condition and its effects into common view and understanding with clear and affecting language. There are concrete-visual poems of some originality in substance from Anitra Nelson and Natasha Adams; Avril Bradley plays a fast little poem-tale with text acronyms. From Kevin Gillam, two more conventional poems (in form), yet, as usual from Gillam, edgy, evocative and honed-as. I like the ‘White’ and ‘Black’ play in the spacious caesura and enjambed format of Neil J. Pattinson’s poem, ‘Integrity’: there’s a see-saw music here that interrogates what is integral, as Pattinson does in the last two lines. All four poems from Pattinson are equally inventive, leaning on the vernacular (a familiar note for the whole magazine) in refreshing and eye-opening ways.

Coral Carter and Sandy Caldow provide colour visuals that provoke and deepen as you view them. The poet ACR plays with the the word ‘VULVA’ and follows with what seems a stream-of-consciousness prose poem on writing that is arresting and in-the-moment of her late afternoon at home. Lauren Williams lampoons the ‘form’ of the high-heel shoe and its physical and psychical debilitation of women, in sharp words and in the shape of the subject shoe. Arjun von Eaemmerer does far more than pun with the sound of words and clichés in a beautiful 3 poem suite of four line stanzas.

A five-page prose piece from Hector von Willebrandt on the pharmacopeia of Liquor of Lattan, a satirical take on healing solutions (this one using the distilled properties of bandaids!) is reminiscent of Borges. Three poems from Sandy Caldow depict, in clear and simple language, affecting tales of ‘today’. Sean O’Callaghan at his mad best, rambles hilariously upon the ‘postfactual’ weekly ‘horrorskopes’ of ‘killarney’; plus two more poems, one a nostalgic take on after-school (at eleven years old) football with a mate, including the line ‘the electric Wires were crying’. TT.O. has two more poems in his fascinating series of ‘portraits’ of ‘forgotten’ Australians: real history in the lives of people. There are more poems from Jeltje, Henry Briffa and Daniel John Pilkington, all using variations on sharp, simple language that carries their minds and hearts into ours.

And then there’s the CD, with some of Melbourne’s and Sydney’s best sound-poets and performance/spoken word artists over the past forty years, including the late great Jas H. Duke, Amanda Stewart, Peter Murphy, and the sound poet Carolyn Connors, whose piece alone is worth the price of the magazine, and two more portraits from TT.O. on Graham Kennedy and Jack O’Hagan: 44 works from eighteen poets, ranging from 8 seconds to 6 minutes 40 seconds.

It’s important to note that Collective Effort Press eschews financial support from any of the Arts bodies, instead depending on subscriptions and sales to survive. This is the kind of magazine that works away from the ‘art world’ that, as Robert Hughes suggested, is the enemy of art. If you love your art in and around words and language, and you are tired of or bored by what you read elsewhere—or even if you are not—you owe yourself the $10 to buy this issue, at Readings bookstores in Melbourne, or straight from Collective Effort Press, and to subscribe, if you like it as much as I do.

Grant Caldwell’s latest books are the novel, Love & Derangement (Arcadia, Australian Scholarly Publishing, 2014) and Reflections of a Temporary Self: New & Selected Poems published by Collective Effort Press in late 2015. He is a senior lecturer in the Creative Writing program at the University of Melbourne.