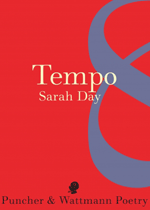 Lessons of the Coffin

In Italian, tempo means ‘time’, and this grand notion is the main theme of Day’s most recent collection. However, as a comparison with earlier titles such as A Madder Dance and Quickening tends to suggest, the word ‘tempo’ can also imply a ‘change of pace’. As it turns out, many of the poems are about the slowing down that accompanies any steady human maturing past the age of fifty, as well as the increasing sense of vulnerability such a change brings.

Inevitably, with this shift in the rhythm of life, death begins to make itself felt forcefully. One of the remarkable things about Tempo is the variety of manifestations that the difficult idea of dying can take. The opening poem ‘El Iskandariya’ for instance — a formal historical poem reminiscent of Constantine Cavafy — imaginatively retells the planning one of Alexander the Great’s cities. Barley flour is used to mark out the proposed city’s boundaries, but this attracts swarms of birds from the nearby marshes that ‘kill off’ the ideal city before work on its construction can begin. The collection comes full circle with a poem about sleep as a rehearsal for death, and sounds a morbid note in the lines ‘Each night / this practising the aloneness of coffins’.

Between these points, hints and images of demise and decease abound. It’s in the passing of time as commemorated in New Year’s celebrations; in a visit to Pompeii and its macabre casts of people caught forever in their moment of terror; in the terrible bleakness of a European Winter; in the blade of a mower as it cuts through grass and anything else in its path; in a plantation of regimented trees that ‘breathe death in life’; in an ancient vault full of seeds that have never germinated; in the destruction of urban landscapes in the course of ‘development’; in the frailties that the process of human ageing brings with it, such as failing eye-sight and Alzheimer’s disease; in memory as a token of lost time; in environmental degradation; in the threat of lethal creatures such as snakes; in the danger posed by water in floods and high seas; in the disappearance of rural ways of life; in a row of seashells on a bathroom window sill filmed with dust; in the tomb of a dead painter . . .

This poses a problem for the poetry. How do you doctor the black rainbow without succumbing to its negativity? How do you celebrate the experience of being alive and produce a poetry that is vibrant and full of energy when the reality of death seems virtually overwhelming? What kind of language do you use to write of the slowing tempo without succumbing to its despair?

Day’s work provides answers to these questions. One of the highlights of the book for me is ‘The Raven’s Bill’:

rests its case
at the foot of the wood-heap.
Clamped shut
on slow laconic vowels,
the beak with its clean know-how
minus the bird.
Maggot and ant
have conspired like analysts,
scoured right back
to corvid truculence.
Polished, sagacious
as a sonnet
or a sacred law,
steel-cast to flay carrion,
pierce tempests;
a diamond cutter
match for any oyster shell’s
insouciance and the careless
and mercenary world;
this obsidian bill,
defiant on the palm
as fortitude, resistance.

Here the poet transforms the gruesome relic of the decayed bird into a paradoxical symbol of invulnerability: the bill, in a sense, ‘survives’ the putrefaction of the body. The mathematics of ‘minus the bird’, the professional aura of the simile of ‘Maggot and ant / have conspired like analysts’, and euphemisms such as rests its case, scoured, and polished all contribute to the imaginative minimalisation of death. It’s a powerful piece of writing, and part of its power comes from insistence on defiance, fortitude and resistance. I think it’s important to register here that the poem shows how hard we find it to face death squarely: in the end, we cannot help wanting some kind of continuity. It is perhaps this desire that leads to the idea of a raven’s beak being ‘steel-cast to flay carrion’ — an idea that not only keeps the object alive but allows it to go on killing. Viewed in this light, the inventive depiction of the raven’s beak works as a graceful evasion of death’s bleak truth. Ultimately, the imagistic exuberance creatively diverts us from the core of the matter.

This subtle shift in the face of death in the direction of an afterlife of some kind also manifests in another remarkable poem, ‘Fayoum: Funeral Portraits of Roman Egypt’:

Funereal, it’s two millennia of life
that so arrests. These individuals
are people I might pass out in the street:

priests, soldiers, children, women, men;
full gazes that reflect the inner self
like those of strangers that you meet

across a bus or train and fleetingly
in the unguarded moment see close up.
This woman circa AD seventy

with crow’s wing brows, dark, languid lids and lips —
the disconsolate angle of her swan neck
calls attention to her sombre beauty.

these portraits painted on the coffin wood
like missives from another age, are grave
and intimate. They make of time a sieve

and watch the promise and the pathos of
the passing days. As if they see behind
and what’s before, they gaze with eyes that live.

Again, the poem insists on the livingness of what is dead, while it (discreetly) praises art’s power to confer a form of immortality on human beings, making the eyes of those no longer alive ‘live’ in their painted gaze. Another interesting point is that Day finds solidarity with the dead: along with the growing awareness of her own mortality, she gains a sense of the broad sweep of human endeavour. For this reason, she can write that death is both grave and intimate. She makes this discovery explicit in the poem ‘Far and Near’: ‘Geography and history / mean so much more to me — / I want to know how people thought and slept / and lived in Rome and China and Egypt / a hundred or two thousand years ago.’ Other poems scattered throughout Tempo — ‘Mower’, ‘Skies’ (‘we are our earliest ancestors’), ‘Hay Load’, ‘Cows at Night’— also insist on a heightened awareness of ancestral continuity.

This discovery confirms for Day the deeper significance of traditional poetic forms: they too connect us with our past. ‘Fayoum’ makes use of iambic pentameter throughout, and there is an unobtrusive rhyme between words in the last lines of pairs of stanzas (‘street/meet’, ‘seventy/beauty’, etc.). Against this formality, the poem opens with a deliberately colloquial diction and a down-to-earth setting (strangers on buses and trains). This counterpoint is the skilful enactment, at the level of poetic technique, of death as ‘grave and intimate’. And yet, in the final thoughts of the poem, the dead are credited with a supernatural all-knowingness (‘As if they see behind / And what’s before’) which lifts them out of the realm of mortality. Again, the terrible brunt of death is subtly diminished by the poet’s craft.

Alongside poems that a formal, linguistically elaborate, and often highly indirect, Day also includes a number of poems in the ‘plain’ style: these are relaxed in their phrasing, shorn of artifice, and attempt directness. One of the most memorable of these is about the poet’s parents:

My mother told me once —
she was seventy perhaps —
how, in the night from time to time,
my father took her hand
and that, in those moments
she reflected that she had been lucky
in life for all the pain it cast.
I think of them, like that,
in their house by the silent river,
side by side, holding hands,
the world and its great troubles
in the dark all around them. (‘Luck’)

A sense of human fragility here is conveyed starkly, as well as the meaningful strength of that simplest of gestures, holding hands. One of the few poetic devices at work here is the ambiguity of the word ‘for’: it could mean ‘on account of all the pain’ as well as ‘despite all the pain’. This recognition of the ‘dark’ as something to be grateful for implies an attitude to death more productive, I think, than the furtive wishings for an undeathed existence revealed in some of the lyrical texts. As Simon Parke reminds us in The Beautiful Life, ‘the coffin educates for life — not death.’