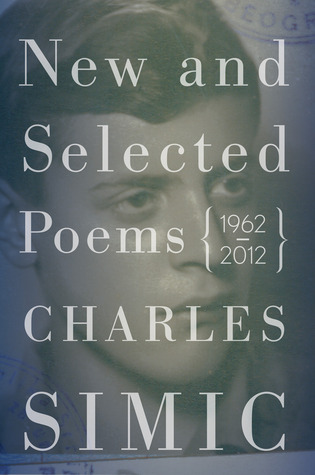 “One of the distinct advantages of growing up in a place where one is apt to find men hung from lamp posts as one walks to school is that it cuts down on grumbling about life as one grows older.”
─ Charles Simic (277)

Charles Simic was born in Belgrade, Yugoslavia in 1938. As a child he witnessed the chaos and carnage of daily life during World War II. But in his teens he immigrated to the USA and made it his permanent home. In a sense he could be viewed as a hybrid poet, a writer fuelled by his anarchic Eastern European childhood but steeped in and complemented by his stabilizing American experience.

Not only is Simic a prolific poet, he is also an essayist and translator. The following excerpt from a 2005 Paris Review interview with Mark Ford might serve as a brief manifesto: ‘I write to annoy God, to make Death laugh. I write because I can’t get it right. I write because I want every woman in the world to fall in love with me’ (295). Simic’s poetry is by turns quotidian, blasphemous, comic, surreal, bacchanalian and terse. Echoes of Pablo Neruda’s Surrealism, Wisława Szymborska’s wit, Charles Bukowski’s lasciviousness, Billy Collins’ ‘stand-up comedy’, Frank O’Hara’s urban swagger and Walt Whitman’s humanism can be found throughout his poetry.

In ‘Butcher Shop’, an early poem and the first in this collection, we observe Simic developing the poetic voice that will become his signature. Here is the poem in its entirety;

This, in my opinion, is one of Simic’s better poems. It avoids the glibness that can often mar his work (more on that later). Typically, it is short, compact and easy to read. He mostly has a straightforward narrative style, as can be seen in the first four lines of the first stanza. And his poems tend to be no more than two pages long, usually less than one (Simic likes to make his point and move on.) It is set at night, with a sinister, gloomy atmosphere, reminiscent of ‘Nighthawks’, that famous painting of a diner by mid century American Modernist artist Edward Hopper. The presence of a butcher shop with a single light increases the sense of menace but also displays the visceral imagery that is one of Simic’s hallmarks. Unexpectedly, the light is compared to ‘the light in which the convict digs his tunnel.’ This is followed by repetitive images of blood. Firstly, blood on an apron, ‘smeared into a map.” Then, ‘great continents of blood/…great rivers and oceans of blood’. Is Simic transporting us to Belgrade circa 1940, evoking a child’s experience of war with all the fear and threat which this implies? Interestingly, we are still left feeling grounded in America, although an America filtered through a Slavic accent and viewed through an Eastern European lens heavily tinted by early, formative experience.

Yet, in the above-mentioned Paris Review interview, when questioned about the hardships he faced coming of age in Belgrade, Simic states, ‘There’s a story they used to tell in my family. The war ended the day before May 9, 1945, which happened to be my birthday. I was playing in the street. Anyway, I went up to the apartment to get a drink of water where my mother and our neighbours were listening to the radio. They said, “War is over”, and apparently I looked at them puzzled and said, “Now there won’t be any more fun!” In wartime there’s no parental supervision; the grown-ups are so busy with their lives, the kids can run free’ (270). So what do we make of this? On the one hand there are there ‘rivers and oceans of blood’ and on the other a child’s exuberant freedom amongst the chaos. This seems to me to be the territory that Simic is constantly exploring and mining for poetry.

‘Explaining a Few Things’, a poem selected for this anthology from a previous collection entitled, A Wedding in Hell, exemplifies the best of Simic in terms of his surrealistic and comedic tendencies. It is also pithy without feeling unfinished:

When I first read this it I thought I was reading Neruda. Then I discovered that Neruda wrote a poem entitled ‘I’m explaining a few things’. Whether Simic was influenced by this poem or not, the strength of ‘Explaining a Few Things’ lies in its amalgam of simplicity and grandiosity. The way Simic, like Neruda, reveals the heroism which is beneath or inextricably a part of the quotidian.

In ‘Crazy About Her Shrimp’, a poem taken from his book A Wedding in Hell, Simic exhibits some of the more dubious and gratuitous aspects of his poetry:

As opposed to ‘Explaining a Few Things’, this poem could or should have been left out of Simic’s New and Selected. If compiling a ‘New and Selected’ anthology is about separating the wheat from the chaff to reveal the wheat more starkly, or attempting to convert the wheat to chaff through revision (if that’s not stretching the metaphor too much) then it fails on both counts. While it is mildly amusing and a bit sexy in a clichéd way, the poem also feels arrogant and too slight. Maybe it makes me a curmudgeon to say this, but I am only saying it because I want to be on Simic’s side: including a poem like this (and others I won’t mention) seems to me to diminish the book. It also ties in with my main criticism of the book, which is that it should have been edited more judiciously. Prolificacy can be a hindrance as much as a help although I’d, to be frank, chose it over others.

Having said that, I would recommend this book for the richness of its best poems and the lessons that a writer as experienced as Simic can impart.