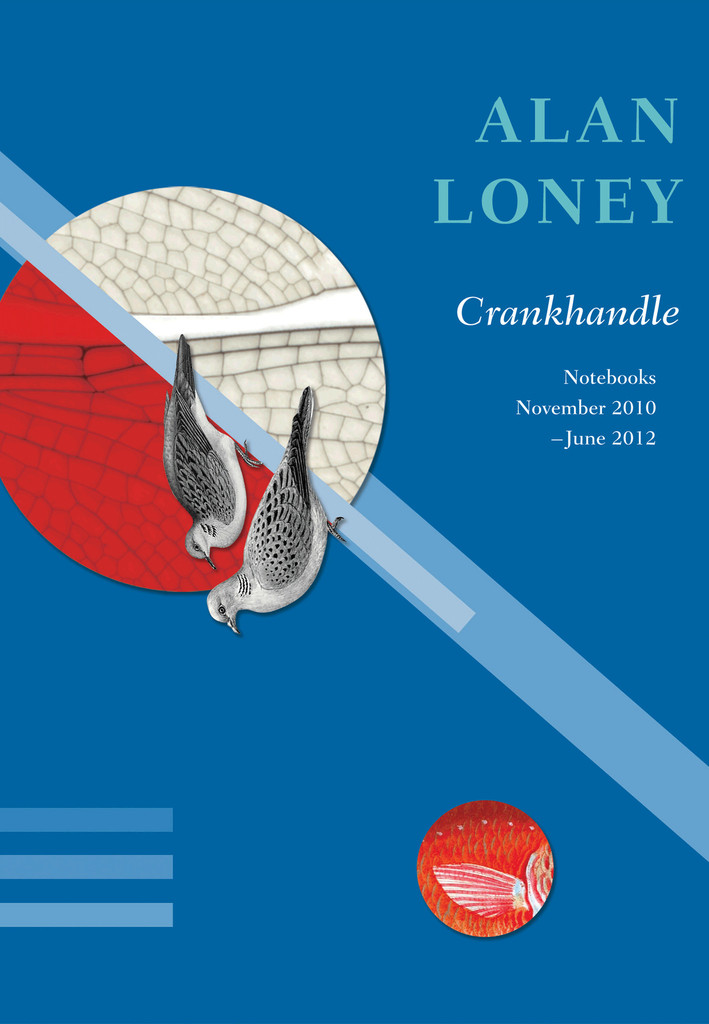 Where the poet of Byzantium is to be ‘set upon a golden bough to sing / of what is past, or passing, or to come’, Crankhandle’s poet, temporally alert and conscious of finitude, opens with a nod each to past, present and future as speculations of the writing moment:

The commitment is to writing as a physical act that happens now and thus the verbal arrangements—notes—have the responsive flexibility of improvisation, each moment opening to the next, mobility made possible by a certain sobriety of the tonal palette and a divestment of complex encumbrances of persona and narrative.

I hesitate to use the term ‘voice’ to describe the poetry’s effects, partly because of that divestment and partly because I don’t wish to downplay its other foundational commitment: to the materiality of the page, of a piece with Loney’s craft as a printer. But the interplay between these dimensions is core to the work. Here is the Orphean voice as birdsong slipping in and out of presence, in play via fluid form with its ceaselessly shifting environs. Here too is the page as a monument—as tombstone, even, the record of the past moment that bears the weight of loss.

Indeed, the page in its vertical and horizontal axes is a place where paradox can be spatialised, all kinds of contrast and negation brought pleasurably, and painfully, into view. Loney writes

and the word proliferates: prohibition, denial, rejection, refusal, protest, lament. The word also gestures beyond articulation and just as, being written, it offers both record and release, so too does the space (the literal space, the page space) given around it to what is unspoken and unwritten.

This grid of affirmation and negation, presence and absence provides Loney with scope for some extraordinary writing, as visually compositional as a weaving and as devoted to the unseen. Lines and clusters hold tension with each other across intralinear space. The diction remains simple and immediate, while ontological complexity occurs through the accumulation of readable possibilities:

Loney’s contributions to the experimental tradition in Aotearoa-New Zealand’s letters are multitudinous. His methodologically intelligent work as writer, editor, printer, and publisher has helped to define the horizons of that tradition since the mid-1970s, while also earning him an international readership, particularly among the US avant-garde. Crankhandle is the third volume of Loney’s ‘Notebooks’ series. Alongside the first volume of the series, Sidetracks (Auckland University Press, 1998—the second’s unpublished), it’s a crystalline enactment of Loney’s poetics. Crankhandle recently won the 2016 Victorian Premier’s Prize for Poetry. It’s good to see this work formally recognised in Australia, where Loney has now been based for fifteen years.