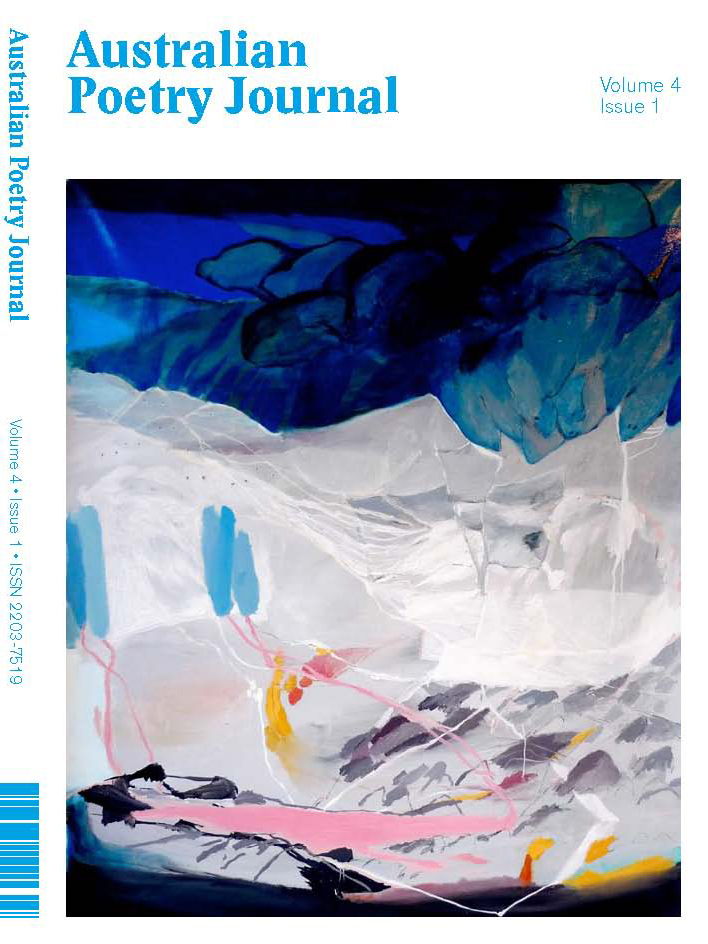 This issue of the Australian Poetry Journal carries forward the work of its founding editor Bronwyn Lea, whose inaugural remarks included the observation that ‘To be alert to a beginning is to be aware of departures and entrances: to be filled with the promise of what is to come’. So it is with this edition, which signals some variations on entering and departing.

Bronwyn got the journal up and running, with a formal elegance that reflected her personal and poetic style. I trust that a kind of elegance will continue to characterise the journal. Readers familiar with the journal to date will note obvious departures in the format and layout, adopted to situate the publication in a way that gives it higher visibility and marketable edge.

Why should I speak of a market for poetry? Is that aspect of production uppermost in the mind of a poet in the act of creation? Traditionalists will say ‘Perish the thought’. Leave that aside for future discussion. What is apparent from the volume of work submitted to the journal is that poets are by and large keen to place their work with outlets that aim to give them an audience beyond their immediate circle. That keenness is in some measure related to the inclusion of publishing and marketing elements in Australian universities’ creative writing courses. Poets’ bio notices frequently declare credentials based on such experience. But poems exist independent of such professionalising considerations, and what impels a poem into being and how it does so is sometimes the very subject of a poem, as several poems in this issue reveal. I will let all the poems speak for themselves: discovery is part of the work of reading.

Other ‘entrances’ to the experience of poetry in this issue include essays that touch or focus on cultural memory, whether relating to memoir, the appearance in Australian poetry of a particular form, translation of a favourite poet’s work, or the matter of poetry that is not afraid to declare itself directed to affording pleasure.

Among departures evident in this issue, I have chosen to accord a place to Australian artists’ and photographers’ work. I welcome proposals for inclusion of graphic works for the print and e-book versions. I also welcome further proposals for audio and performance-based works for the e-version and the new online supplementary version of the journal. More work than the journal can accommodate has already arrived, and I will select examples ranging from well-produced highly experimental works through to well-recorded poems written in more conventional forms. The next issue, like this current edition, will be unthemed, with the aim of attracting a broad range of poets from all States and beyond.

I want to thank Bronwyn Lea for her work in establishing the journal. Thanks also to everyone who submitted work. If you like what you read in this issue, spread the word.